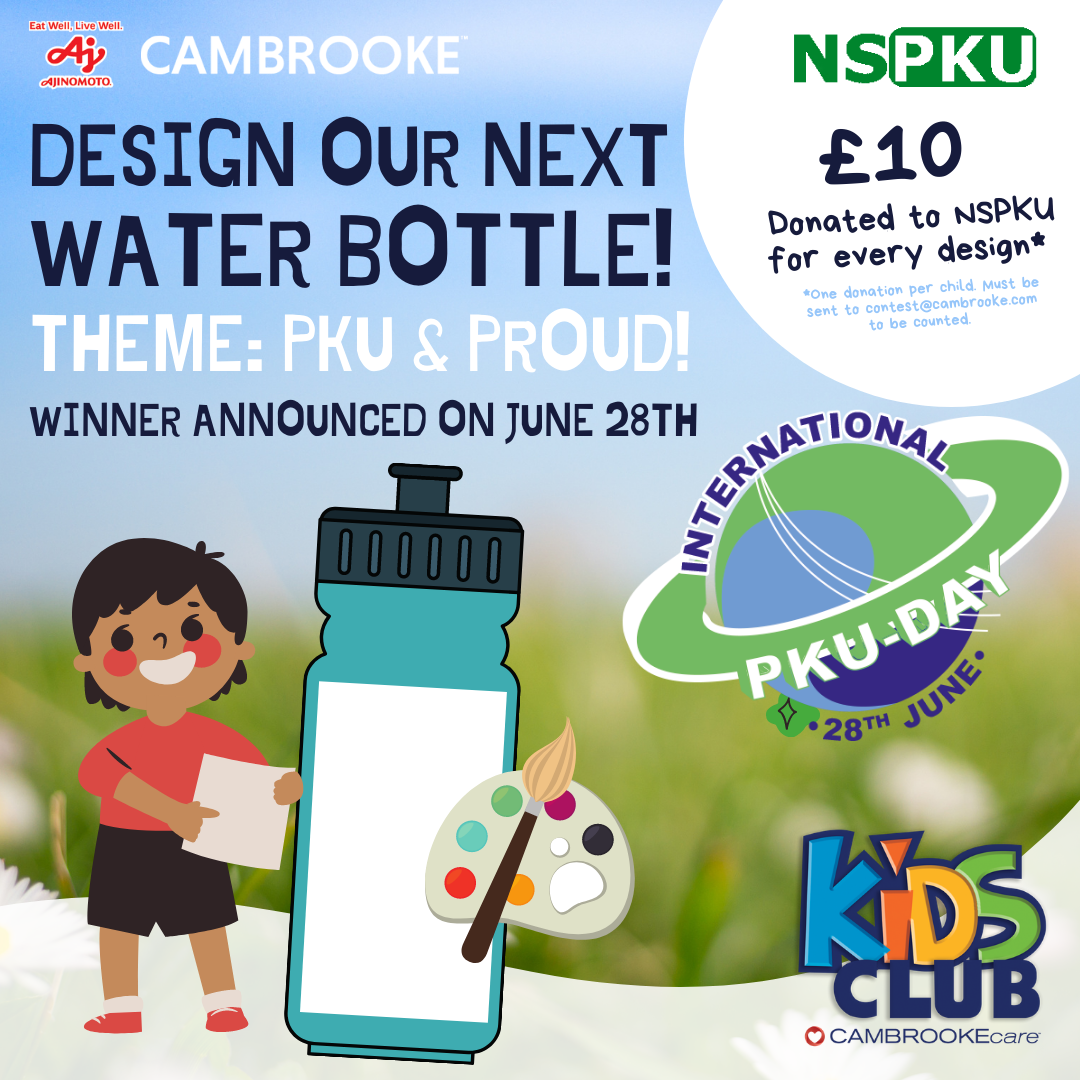 For every child that sends their design, we will donate £10* to the NSPKU. Winner announced on International PKU Day, 28th June 2021

Step 1: Complete and submit the competition form below. Within minutes you will receive the design template to your chosen email address.

Step 3: Scan or take a picture of your design and send it to contest@cambrooke.com before 27th June 2021.

Remember to keep your design safe as we may need you to post it to us if you win!

Step 4: We will pick a winner on 28th June and have the design printed on our next Kids water bottles! If you sent a design, you will also get a bottle in the post!

So What Can You Eat? Movie Premiere and Q&A with creator and co-stars!

This event was so popular in North America, we are bringing it to the UK!

We are offering families a special and unique opportunity to watch ‘So What Can You Eat?’ together with us, followed by a LIVE Q&A session with Creator & Director Jack Everitt and fellow co-stars! NOT TO BE MISSED!

“So What Can You Eat? is a documentary film examining the world’s growing obsession with food and the freedoms it brings from the perspective of those who don’t have the choice.
The relationship we have with food extends far beyond its impact on our physical health or personal satisfaction. Underpinning every decision we make surrounding food lies a primal right to choice, and across all cultures around the world, food, and the ritual of eating, is directly used as a means of bringing communities together.
Presented by filmmaker Jack Everitt, So What Can You Eat? examines the stories of the rare individuals who follow one of the world’s most restrictive diets in a lifelong battle to avoid severe and irreversible brain damage. In doing so he tasks his close-friend, and fellow filmmaker, Liberty Hanson, with trialing the diet for 1 whole month. Through Liberty’s struggles we discover what it really means to have freedom of choice, and how recognising these freedoms can empower us to take complete control of our health and mental wellbeing.” – Source: “So What You Can Eat?”

24 hours before session: You will receive a Zoom link and Movie link/access

So What Can You Eat? FREE Movie Premiere Screening
30-45 minute LIVE Q&A
Cambrooke Gift Box sent after the event (UK residents only)

You will get the chance to take part in a LIVE Q&A with:

Jack Everitt:
Award-winning filmmaker Jack Everitt began his career after graduating from the prestigious BRIT School for Performing Arts in 2006. In his early career Jack honed his skills directing music videos and short documentary series for music schools. His narrative feature debut emerged in 2015 in the form of ‘Goodnight, Gloria’, which featured Thai front-runner, Russell Geoffrey Banks. Jack then went on to work on to work on various projects, directing a number of short films and as cinematographer for the action feature ‘English Dogs in Bangkok’, starring Byron Gibson and Ron Smoorenberg. In 2021 Jack released the feature length documentary ‘So What Can You Eat?’ to shed light on the rare genetic condition condition, PKU, which picked up an International award for Unforgettable Film at the Spotlght Documentary Film Festival. Unlike narrative film projects that had motivated him previously, ‘So What Can You Eat?’ was the first auto-biographical project and was inspired by his own experiences of navigating his career while living with an incurable illness.

Liberty Hanson:
Liberty tries the PKU diet for one month to show the impact it has on her life as someone that does not live with PKU. Find out how she got on! Her journey is fascinating.

Lynn represents the heart and soul of Cambrooke’s mission. Originally inspired to feed her two children who have PKU, Lynn’s passion for feeding others keeps her at the forefront of food science and processing technology. A recognized leader in the PKU community, Lynn continues to focus refining existing product formulations while working with the Cambrooke team to develop new and innovative product ideas. Amongst her roles, she serves as a support group liaison that provides support and patient advocacy while building strong metabolic community ties to both the families and the clinicians that serve them throughout the US and abroad.

John Adams:
John Adams is a founding trustee and board chair of the emerging Global Association for PKU (GAP) and is President of the Canadian PKU and Allied Disorders non-profit which he co-founded in 2008. He has an adult son with PKU, who benefited greatly from newborn screening, early clinical intervention and lifelong therapy. That son is a university graduate and urban firefighter.

Mark Edwards:
Mark has classical PKU and has been on 6 exchanges most of his life.

“I try not to let PKU get me down. At the end of the day, I have PKU, PKU doesn’t have me. But there are days / times that having PKU does get to me. I try my best to overcome this and stick to the thinking “I got this”. Like others I went to primary and high school but after that I went into the world of work… I’ve now been in food manufacturing for 21 years this August”.
David built a dedicated organization to develop, manufacture, and commercialize Cambrooke’s successful line of medical food products for patients with metabolic disorders. He now serves on the Board of Directors.

Suzanne has been a dietitian in the NHS for over 25 years, and for 3 years she has been the Dietitian Advisor to NSPKU. Suzanne teaches nutrition to undergraduates at UWE and works in the NHS providing a service to adults with various metabolic disorders in Bristol.

The NSPKU/Suzanne has published about the challenges of living with PKU, women’s reproductive experiences, prescription difficulties, contributed to a review paper about ageing in PKU and most recently a paper based on the UK PKU community’s experiences of aspartame and the sugar tax.

There is a lot more work still to do, for PKU awareness generally, and also amongst decision makers in the NHS.

There is a need for developing reliable and trusted information about PKU for the community and wider, and this is ongoing work for the NSPKU (me, alongside the team of volunteers who make up NSPKU). 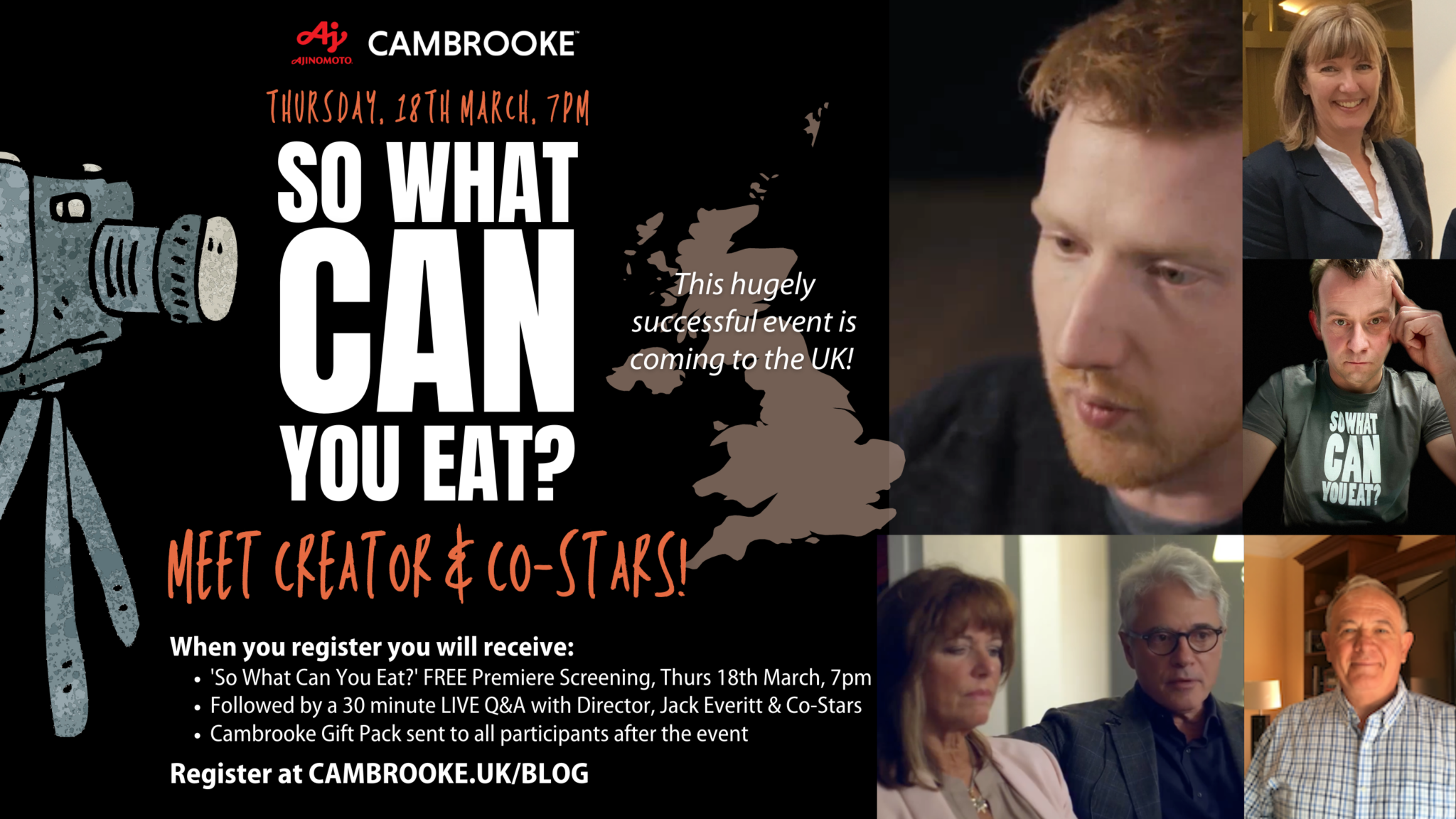 Please note: All 30 hampers have been requested and this competition is now closed.

The Back to School Competition!

T&Cs: Competition closes at midnight BST on 31 August 2020. 3 winners will be chosen at random and announced on 1 September 2020. Winners must contact Cambrooke within 14 days to claim their prize. Prizes are not exchangeable or transferable. ALL competition entrants will receive our 5 Day School Dinner Planner and Hand Sanitiser. Entrants must reside in the United Kingdom or Ireland. 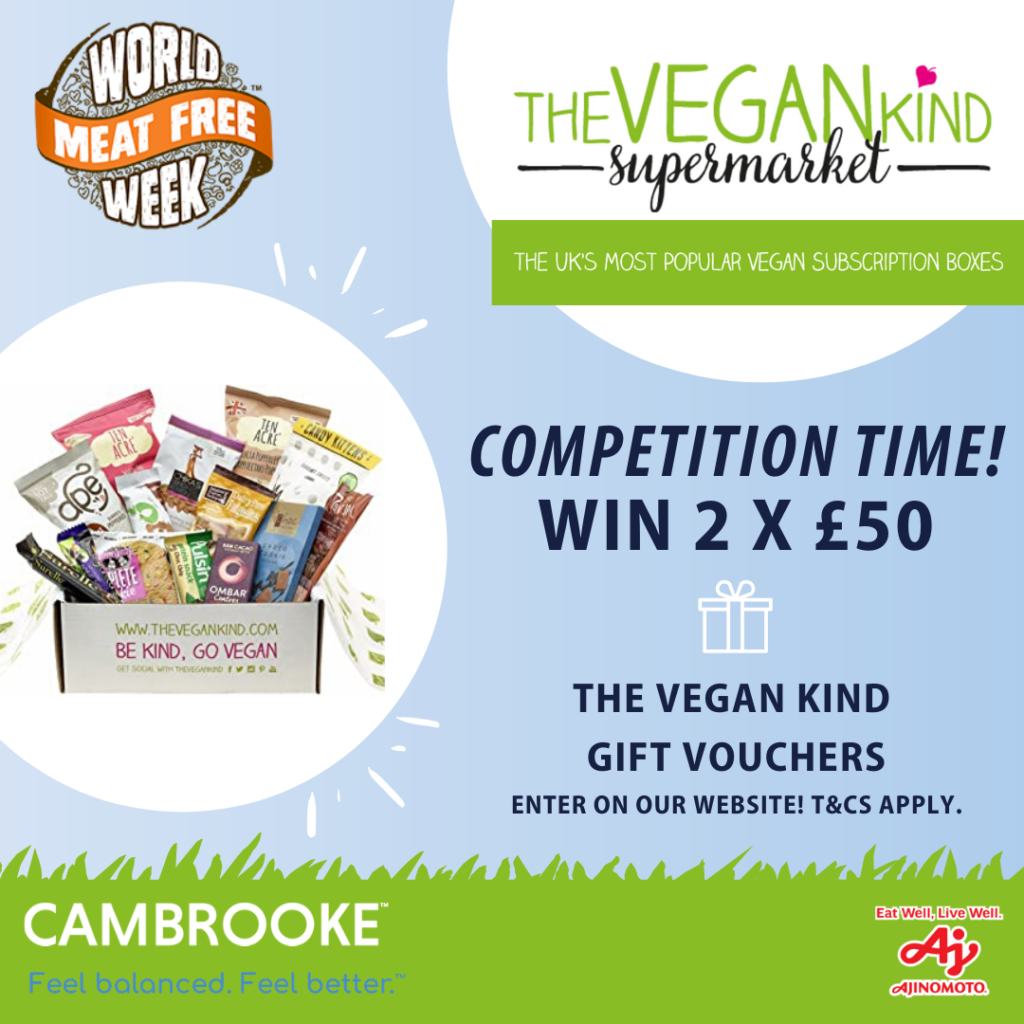 All competition entries will receive our Covid-19 Pack, containing our Low Protein in 15 meal planner, hand sanitiser and face mask. We are also giving away 2 x £50 The Vegan Kind gift vouchers to a couple of lucky participants.

Two winners will be chosen at random on Monday 22nd June and will receive a £50 voucher to spend at thevegankindsupermarket.com. The prize cannot be exchanged or substituted. Winners must reside in the UK. All other entries to the competition will win a Covid-19 pack complete with hand sanitiser, face mask and our Low Protein in 15 recipe book.

Green Cola Competition: Win A Case Of Each Flavour! 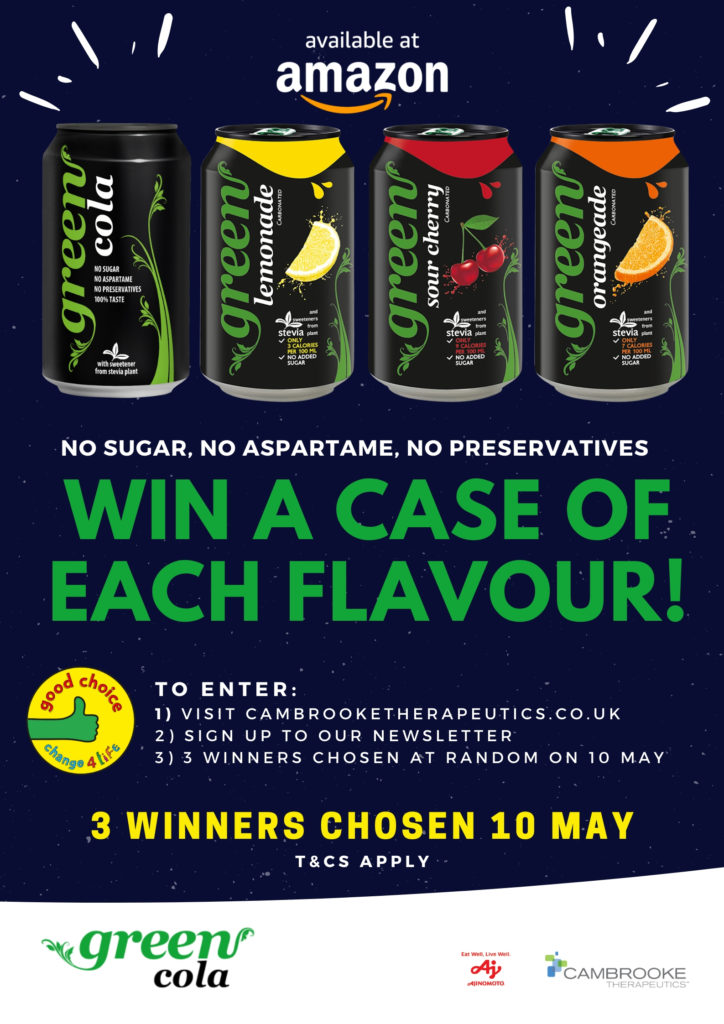 HOW TO ENTER:
Sign up for our brand new newsletter before 10 May to be with a chance to win.
On 10 May, we will choose 3 winners at random and will contact you through the email address provided during sign-up.
Terms and Conditions apply.
Shop Green Cola on Amazon

Terms and Conditions:
Anyone of any age, inside of the United Kingdom is eligible to win.
Once we have randomly chosen our 3 winners, we will email you to confirm your delivery addresses.
Green Cola will arrange delivery of all cases or provide you with amazon vouchers to purchase their cans free of charge. Winners will receive a case of each Green Cola flavour (Original, Lemonade, Sour Cherry, Orangeade).
The prize is not transferable and cannot be replaced with anything other than that stated.
Competition ends on 10 May 2020 and the winner will be announced on or shortly after the 10 May 2020.
If you have any questions about the competition or anything else, please contact ukinfo@cambrooke.com 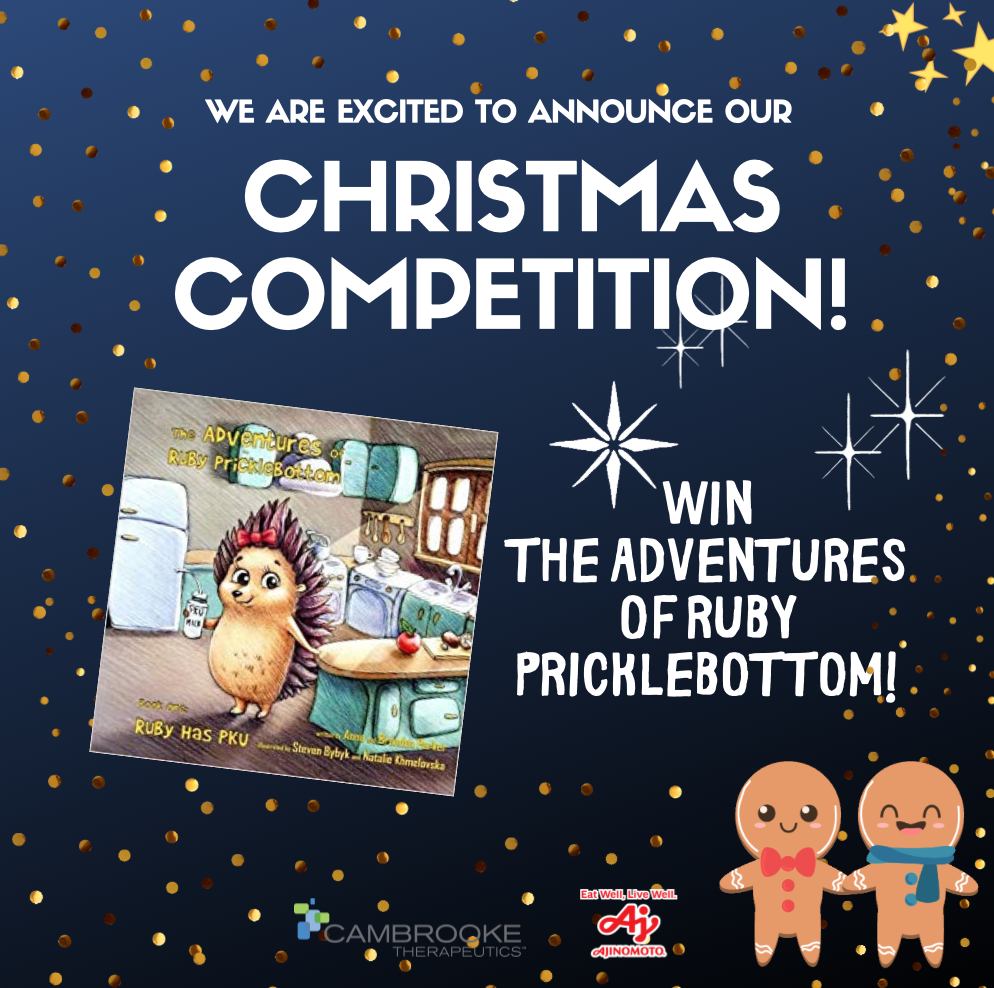 We have 3 copies of ‘The Adventures of Ruby Pricklebottom’ to give away!
Looking for the perfect Christmas gift for your little one? We are giving away 3 copies of The Adventures of Ruby Pricklebottom to help you do just that! Ruby the Hedgehog has PKU and she whisks you away on her journey of learning and discovery. To enter, like and share our Facebook post and then comment below, telling us what you eat on Christmas Day, to inspire others! Competition ends on Sunday 8 December at 5pm. Good luck everyone!

3. Tell us in the comments section below, what you eat on Christmas Day!

Your comment below will not automatically show. Once it is approved it will appear. If you have any questions, please email asteel@cambrooke.com.

Please read the below terms and conditions:
By entering the competition, you are agreeing to these terms:

The winner will receive one copy of the book ‘The Adventures of Ruby Pricklebottom’.
Any contact details submitted will be secure as per EU GDPR guidelines.
Good luck everyone!

© Ajinomoto Cambrooke, Inc. All rights reserved.
By continuing to browse our site, you agree to the use of our cookies.
OK
Manage consent

This website uses cookies to improve your experience while you navigate through the website. Out of these, the cookies that are categorized as necessary are stored on your browser as they are essential for the working of basic functionalities of the website. We also use third-party cookies that help us analyze and understand how you use this website. These cookies will be stored in your browser only with your consent. You also have the option to opt-out of these cookies. But opting out of some of these cookies may affect your browsing experience.
Necessary Always Enabled
Necessary cookies are absolutely essential for the website to function properly. These cookies ensure basic functionalities and security features of the website, anonymously.
Functional
Functional cookies help to perform certain functionalities like sharing the content of the website on social media platforms, collect feedbacks, and other third-party features.
Performance
Performance cookies are used to understand and analyze the key performance indexes of the website which helps in delivering a better user experience for the visitors.
Analytics
Analytical cookies are used to understand how visitors interact with the website. These cookies help provide information on metrics the number of visitors, bounce rate, traffic source, etc.
Advertisement
Advertisement cookies are used to provide visitors with relevant ads and marketing campaigns. These cookies track visitors across websites and collect information to provide customized ads.
Others
Other uncategorized cookies are those that are being analyzed and have not been classified into a category as yet.
SAVE & ACCEPT