The PKU Diet and Emotional Health

The PKU Diet and Emotional Health

At NSPKU 2019, Lesley Walker, Psychological Therapist, took attendees through her emotional first aid toolkit for combatting distress and trauma associated with living on a Low Protein Diet. We wanted to write a blog post about the main technique she uses for her own patients, to help others that might be going through similar emotional health issues.

Lesley’s children, son-in-law and grandchildren have PKU, so she knows first-hand how the condition can affect an individual and family.

Lesley likened the initial PKU diagnosis to a ‘trauma’. A trauma is an event that is (i) negative; (ii) life changing; and (iii) unexpected. Post traumatic stress disorder (PTSD), anxiety and depression can all result from this trauma if not addressed properly, and Lesley discussed her most effective technique for combatting these negative feelings. This technique is called the Emotional Freedom Technique.

The Emotional Freedom Technique (EFT), is a technique that has been used quite prevalently in the last 15 years, for combatting trauma. EFT is described as emotional acupuncture, without the needles.

According to Lesley, “If we are stressed, angry, fearful, phobic or anxious then our mind and body system goes into the fight or flight stress response. If this response is ongoing we often become worn out, sick, overweight and generally unhappy. This is when tapping becomes an extremely useful and effective technique. If used correctly it stops this stress response. Scientific studies have shown that using EFT, retrains the limbic system and permanently alters the brain’s neural pathways. In other words, it literally rewires the brain so that a previously negative event is perceived in a completely new, more positive way.”

First of all, you should list certain memories that triggered unpleasant feelings for you in the past. These could include: initial diagnosis, being at school, eating out, dealing with hospitals and medical professionals, entering teenage and more.

Then, list the emotions that come along with those memories. This could include: disbelief, loss, fear, responsibility, feeling different, isolation, lack of control, worry, guilt and so on.

Don’t attempt to fix all negative feelings at once. First of all, just focus on fixing one particular memory, and the corresponding negative feeling associated with that memory. Start small. Perhaps think about one negative problem or event that has been on your mind. Be very specific.

Using the three middle fingers on your right hand, lightly tap the side of your left hand (next to your baby finger) 10 times. Using the same three fingers, tap the top of your head, under your eye, under your nose (above lip), your chin, your collar bone, under your arm, and then repeat again (10 times each) for as long as you can or need to feel less stressed and more revived. 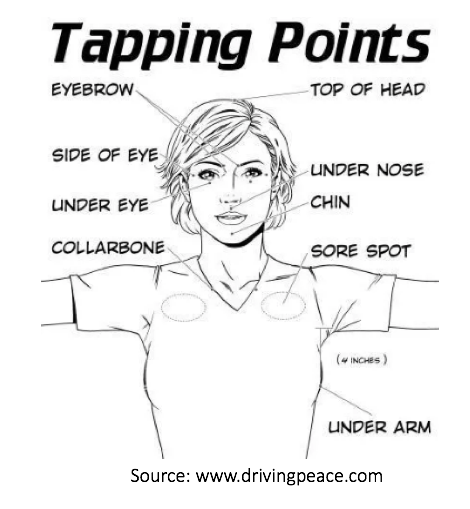 The Emotional Freedom Technique: How it works

Lesley claims that one hour of tapping has the ability to turn on/off 70 different genes. She also claims that the same hour of tapping can drop cortisol by as much as 24%. Cortisol is a stress hormone released by the adrenal glands, and is important for helping your body deal with stressful situations. However, too much cortisol, over time, can result in high blood pressure, weight gain, moods, reduced energy levels, poor sleep and more.

Tapping is based on acupuncture and is a form of ‘acupressure’. When ‘mind’ techniques fail to work, ‘body’ techniques are used as a more aggressive form of trauma relief, and have a much higher success rate.

If you have any further questions about this technique, the low protein diet or would like to speak with Lesley directly, visit: http://www.lesleywalkertherapy.com/. Or if you have any other questions, email us at ukinfo@cambrooke.com.

© Ajinomoto Cambrooke, Inc. All rights reserved.
By continuing to browse our site, you agree to the use of our cookies.
OK
Manage consent

This website uses cookies to improve your experience while you navigate through the website. Out of these, the cookies that are categorized as necessary are stored on your browser as they are essential for the working of basic functionalities of the website. We also use third-party cookies that help us analyze and understand how you use this website. These cookies will be stored in your browser only with your consent. You also have the option to opt-out of these cookies. But opting out of some of these cookies may affect your browsing experience.
Necessary Always Enabled
Necessary cookies are absolutely essential for the website to function properly. These cookies ensure basic functionalities and security features of the website, anonymously.
Functional
Functional cookies help to perform certain functionalities like sharing the content of the website on social media platforms, collect feedbacks, and other third-party features.
Performance
Performance cookies are used to understand and analyze the key performance indexes of the website which helps in delivering a better user experience for the visitors.
Analytics
Analytical cookies are used to understand how visitors interact with the website. These cookies help provide information on metrics the number of visitors, bounce rate, traffic source, etc.
Advertisement
Advertisement cookies are used to provide visitors with relevant ads and marketing campaigns. These cookies track visitors across websites and collect information to provide customized ads.
Others
Other uncategorized cookies are those that are being analyzed and have not been classified into a category as yet.
SAVE & ACCEPT